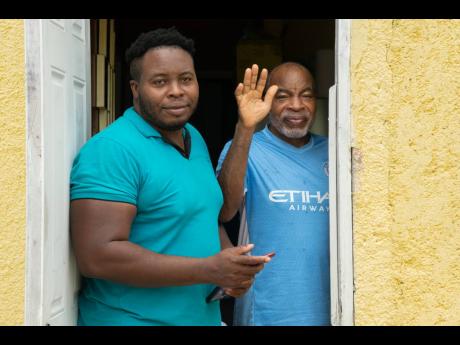 David Ricketts (left) and father, Delroy, at their home in Clarendon. 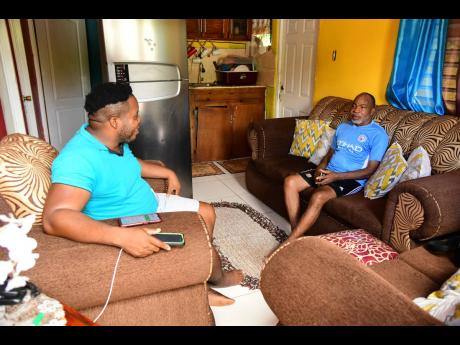 David (left) and his father Delroy Ricketts at their home in Clarendon, three months after the senior Ricketts underwent brain surgery.
1
2

Three months ago, Delroy Ricketts laid on a hospital bed wide awake while doctors cut into his head to remove a mass from his brain.

Ricketts, 62, had a tumour in the frontal right area of his brain. It was removed by Dr Roger Hunter and Dr Clement Smith during an eight-hour procedure.

Reflecting on the procedure, which Hunter said was the first operation of its kind done in Jamaica, Ricketts warned that it was not something for the weak.

While the sounds of the surgery were unsettling at times, Ricketts was happy to have been conscious for the entire process.

"It was smooth to have such an experience because all through the process me see wah gwaan, and mi hear wah gwaan. Mi did just affi hope seh nothing nuh go wrong and just calm myself."

Ricketts remembers being reassured by WEEKEND STAR reporter Simone Morgan-Lindo and his doctors that he would be alright. His son, David Ricketts, said the entire process, including the road to recovery, has been nerve-wracking.

"When he came out things take a likkle bit of a turn because you see him head start swell, and then him cyah move. It was a bit frightening because him come outta surgery a look regular, and then fi see him head just a swell," David recalled.

David said while he has yet to tabulate the costs associated with the ground-breaking medical procedure, he is confident that the bill is well in the region of $10 million.

Regardless of the hefty price, David says he would recommend this surgery to anyone who can afford it as he believes if he had waited for a cheaper alternative, his father may have died.

"I wouldn't have done it differently because it really relieve him of the pain so he can go back to normalcy. It's a costly surgery but it's better for the wait time. I don't think I could have waited on the government system because it was about two weeks ago KPH (Kingston Public Hospital) called me to say that they are ready for him. Just imagine two weeks ago, from June 15 (when the surgery was done), maybe we would have lost him."

Ricketts was full of life and energy carrying out his daily tasks as a butcher in Clarendon. Well that was until three months ago when he began experiencing debilitating headaches which significantly impacted his quality of life. Additionally, the usually lively man began to talk less and lost partial motion on his left side.

Though now free of the headaches that previously plagued him and able to walk and carry out basic daily activities without any assistance, the elder Ricketts is yet to resume his work as a butcher.

Hunter said that Rickett's recovery is within the range of expectation.

"It's nothing like 'Oh my God, I've never seen this ever in my life'. He's within the range of expectations for recovery and at three months he's just about right."