ONE-MINUTE READS ... News from across Jamaica 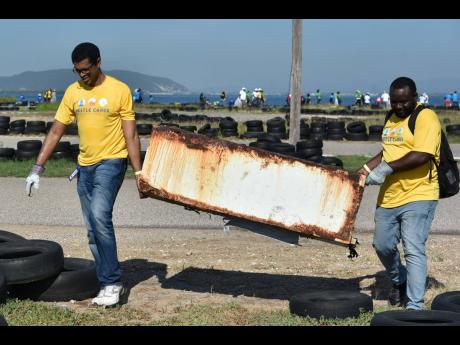 Tourism earnings to exceed US$4 billion

At the same time, Bartlett said that visitor arrivals, including from cruise, are projected to be above three million, which is similar to 2019 figures.

"So, all in all, tourism is looking good," the minster said.

"We are making sure that the industry is [playing] its key growth role in the wider Gross Domestic Product (GDP) growth arrangement," he said, noting that priority is also being placed on ensuring that the sector is more inclusive, and provides for the well-being of Jamaica as a whole.

Police commissioner, Major General Antony Anderson, said the new state-of-the-art police station in Frome, Westmoreland will not only provide improved working conditions for cops, but serve as a haven for the community it serves.

"This station is significant, not only for our members ... but this is for the community. It is a refuge for the community; it is somewhere to go if you have concerns, even if it is not about policing. The police, here at Frome, should accept you as a citizen and try and find a way to assist you," Anderson said.

The station is to be built at a cost of $175 million with funding from the National Housing Trust.

Construction, which commenced in August, is expected to be completed within 30 months.

A record producer was shot and killed in Shooters Hill, 7 Miles, St Andrew on Saturday.

The police said that he was shot and killed by unknown assailants about 7:35 p.m., after he went to visit a friend in the area.

A motive for his killing has not been disclosed.

Volunteers cleared more than 1500 pounds of garbage from the One Man Beach along Jimmy Cliff Boulevard in Montego Bay on International Coastal Cleanup Day (ICCD) on Saturday.

The initiative, which was organised by the Montego Bay Marine Park, saw over 150 individuals, including students, members of service clubs, and hotel and community groups converging at the beach from as early as 6 a.m. to conduct clean-up activities.

The volunteers combed the beach, removing glass, paper and plastic containers and other debris. The plastic items will be collected by Recycling Partners of Jamaica.

The day was observed under the theme, 'Nuh Dutty Up Jamaica'.

Executive director, Montego Bay Marine Park, Hugh Shim, told JIS News that the annual observance of ICCD is important in spreading information about the need to preserve the environment.

The Consumer Affairs Commission (CAC) said it secured $15.9 million in refunds and compensation on behalf of aggrieved consumers between April 1 and August 31, 2022.

This is almost double the amount of $8.4 million obtained for consumers in the corresponding period in 2021.

Dolsie Allen, CEO of the CAC said that for the first five months of the financial year, the Commission handled a total of 838 complaints. She said the top categories in which most complaints were lodged are utilities, electrical equipment, appliances, and motor vehicles.