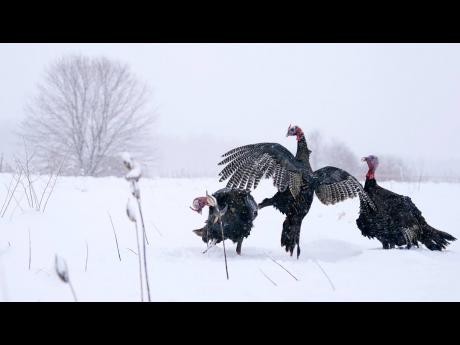 A US city is being terrorised by a gang of rampaging turkeys.

Esther, Gladys, Patricia and the ring leader, Kevin, have been enforcing their reign of terror over the 40,000 residents of Woburn.

The feisty fowls have been attacking everything from children to bikes, chasing down cars and holding people hostage.

Local resident Meaghan Tolson told CBS Boston: "The most aggressive one is Kevin.

"Even if you are parked, Kevin will try to get in your car.

"You have to open your passenger-side door and lure them over there, then make a clean break to the house.

"The other turkeys are three ladies, because their colouring isn't distinct. It's Esther, Gladys and Patricia."

Another local, April Drolette, recalled how the turkey tormentors left her trapped inside her car, which meant she needed help from family members to escape.

Fossils taken from the Cretaceous Period have reportedly prove that dinosaurs were already in decline before the cataclysmic space rock hit the planet 65 million years ago.

Scientists analysed over 1,000 ancient eggshells, as well as tyrannosaurus and sauropod bones from China, and found that there was a clear drop in biodiversity in the final two million years of the Mesozoic Era.

Wang Qiang, an associate researcher at the Institute of Vertebrate Palaeontology and Palaeoanthropology of the Chinese Academy of Sciences, said: "Dinosaurs went extinct gradually over millions of years, instead of coming to an abrupt end from sudden disasters.

"Our results support a long-term decline in global dinosaur biodiversity prior to 66 million years ago, which likely set the stage for the end-Cretaceous non-avian dinosaur mass extinction.

"The end-Cretaceous catastrophic events, such as the Deccan Traps and bolide impact, probably acted on an already-vulnerable ecosystem and led to non-avian dinosaur extinction."

Pottery found at an ancient burial site has revealed that opium use dates back 3,500 years.

Excavations carried out by the Israel Antiquities Authority and Weizmann Institute of Science have uncovered a series of late Bronze Age graves.

The archaeologists discovered traces of the hallucinogenic in ancient pottery pieces found at the ruins of the Canaanite necropolis at Tel Yehud.

The evidence suggests the psychoactive drug was used in ancient funeral rituals, as the Israel Antiquities Authority believe that the pots were placed inside the graves of loved ones.

A total of 22 vessels that date back to 14 BC were found to contain traces of opium.

Vanessa Linares, from Tel Aviv University, said: "The discovery offers us a rare glimpse into the burial customs of the ancient world.

"We do not know what the opium's role was in the ceremony - whether the Canaanites in Yehud believed that the dead would need opium in the afterlife, or whether it was priests who consumed the drugs for the purposes of the ceremony.

"Moreover, the opium sheds light on the opium trade in general."