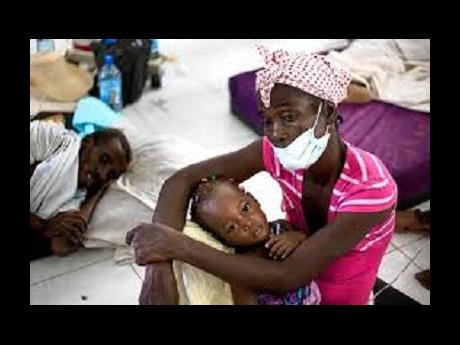 PORT AU PRINCE, Haiti, Oct 3, CMC – Haiti has confirmed that at least eight people have died from cholera three weeks after the United Nations had confirmed an outbreak of the waterborne disease in the French-speaking Caribbean Community (CARICOM) country.

Haiti had not recorded a case of the disease in the last three years and the Ministry of Health said the first case was discovered in the Savane Pistache/ Decayette area of Port-au-Prince with additional suspected cases being investigated in the Brooklyn neighbourhood of Cité Soleil.

“The United Nations is actively monitoring the situation and is working with the government to mount an emergency response to this potential outbreak, focused not only on limiting the spread of the disease, but also on informing the population how to take immediate lifesaving action at the household level,” the UN said.

“Additional support will consist of expanded surveillance, increased water and sanitation provision, the opening of cholera treatment centre's and the reinforcement of case management.”

Cholera first appeared in Haiti 12 years ago this month when an outbreak was confirmed on October 20, 2010. More than 800,000 Haitians became infected and over 10,000 died from the disease. Haitian health authorities had said that the disease was brought into the country by UN peacekeepers from Nepal and the UN refused to admit its responsibility or apologise, leaving some of its own independent rights experts to criticise its response and failure to compensate victims.

On Sunday, the UN said specialised emergency response teams are ready to be deployed to support affected communities but acknowledged that it may be difficult given the prevailing socio-political environment where criminal gangs have been staging rival gang warfare and persons have been staging anti-government protests.

“It is imperative that these teams be guaranteed safe access to areas where cases have been confirmed or suspected, to help mitigate the risk of a large or disruptive outbreak,” the UN said, noting that Haiti is also dealing with a shortage of fuel as the gangs continue to block access in and out of the main fuel terminal.