Periods of rainfall to persist as storm threat lessens 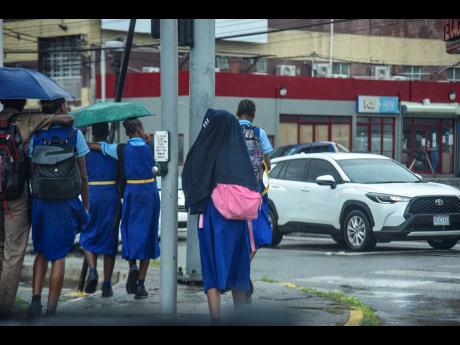 Students make their way home along Old Hope Road in St Andrew in a slight drizzle yesterday. More rain is expected even as Tropical Storm Lisa moves further away from the island.

The tropical storm watch for Jamaica was discontinued last night as Tropical Storm Lisa began to move away from the island and over the northwestern Caribbean Sea.

However, the island could continue to experience periods of rainfall, the Meteorological Service (Met Office) stated. At 8 p.m., the centre of Tropical Storm Lisa was located near latitude 15.5 degrees North, longitude 78.9 degrees West, or about 320 kilometres (200 miles) south of Negril Point.

A westward to west-northwestward motion is expected over the next few days. On the forecast track, the centre will continue to pass south of the Cayman Islands today and then move near the Bay Islands of Honduras early on Wednesday before approaching Belize. Maximum sustained winds remain near 75 km/h (45 mph), with higher gusts. Slow strengthening is expected, and Lisa is forecast to become a hurricane on Wednesday over the northwestern Caribbean Sea. Tropical storm force winds extend outward up to 165 kilometres (105 miles) from the centre.

"Although the Tropical Storm Watch is no longer in effect, the system will continue to induce bands of rainfall over the central Caribbean, including Jamaica, for the next couple of days, and residents should remain on the alert for possible flash flooding in flood-prone areas. Fishers and other small craft operators are also encouraged to exercise caution until wind and sea conditions have returned to normal," the Met Office said.

"The Meteorological Service will, however, continue to monitor the progress of this system and will inform on weather conditions through news releases and regular daily forecast products," the entity added.