Phased reoccupation of Cornwall Regional Hospital to begin next year 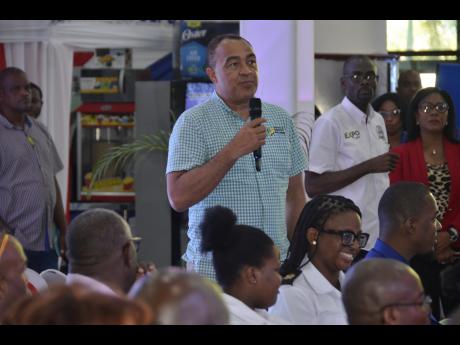 Reoccupation of the main building at Cornwall Regional Hospital in Montego Bay, St. James, is expected to commence on a phased basis next year.

Minister of Health and Wellness, Dr Christopher Tufton, made the disclosure while giving an update on the progress of renovation works on the multistorey Type A health facility, during the Montego Bay Chamber of Commerce and Industry’s (MBCCI) MoBay Expo 2022, held at the Montego Bay Convention Centre in Rose Hall on November 4.

Dr Tufton said he is satisfied with the progress of repair work done over the last six months.

“From six months ago to now, I am a lot more confident in terms of the progress being made, and we do expect over the next year the phased reoccupation of that facility,” he said.

The Minister, during his contribution to the 2022/23 Sectoral Debate in the House of Representatives in May, informed that work under Phases 1 and 2A of the rehabilitation programme had been completed at a cost of $1.3 billion.

Work under Phase 2B is now under way and is aimed at remediating structural defects. That phase of the repairs is expected to cost $1.7 billion.

Meanwhile, Dr Tufton noted that the Government continues to invest in the improvement of the island’s health infrastructure.

“There is a plan for major infrastructure development [in health]. If you go to the Cornwall Regional Hospital site, you will see three cranes building out a six-storey, 250-bed facility for adolescent and paediatric care, and that construction is in full flight to be completed in another year or so. It  will complement the Bustamante Hospital for Children except that it also deals with adolescent care from 12 to 18 years,” he noted.

“Nationally, there are big plans around building out Spanish Town, a six-storey facility, at a cost of US$60 million, and May Pen and St Ann’s Bay, under an Inter-American Development Bank (IDB)-funded programme. So, from an infrastructure standpoint, we are making progress [in healthcare],” the Minister pointed out.