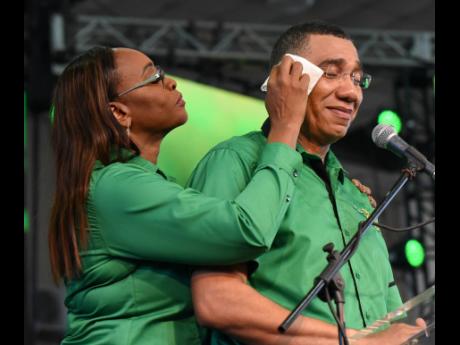 St Andrew East Rural member of parliament Juliet Holness wipes sweat from the face of her husband, Prime Minister Andrew Holness, as he gave the main address at the Jamaica Labour Party 79th annual conference at the National Arena yesterday. 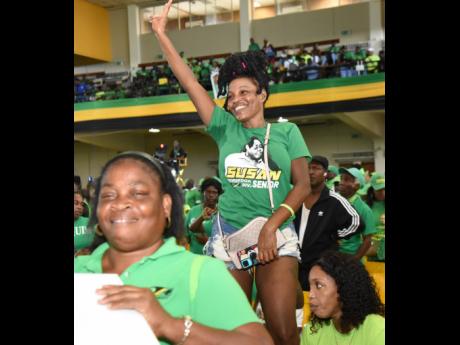 In a scripted yet electrifying address to the party's 79th annual conference at the National Arena, Holness said the party need to be in power for at least 20 consecutive years to transform Jamaica and reverse the problems inherited from the Opposition People's National Party (PNP).

She said that the Andrew Holness-led administration is the government Jamaica has "always been looking for" and stressed that it is important for Labourites to "encourage ourselves to keep up the good work".

"Jamaica needs consistently great government. In the same way that we endured 18 and a half years of lukewarm leadership, Jamaica now deserves to have at least 20 years reaping the benefits of a strong, balanced, visionary, accountable government," she declared.

The JLP was in the political wilderness between 1989 and 2007 when it was elected to power under the leadership of Bruce Golding. However, the party was booted from office in 2011, after just one term. Holness, who served as prime minister for four months and led the party into the 2012 defeat, returned to register back-to-back wins with the JLP in 2016 and 2020.

"The people of Jamaica believe in the Jamaica Labour party for a reason. They have given us a mandate to transform this country to make Jamaica stronger," Holness, a second-term MP said.

"It is the wisdom of the Jamaican people who needed to see visionary leadership, steady strong hands and a caring genuine heart," Holness said.