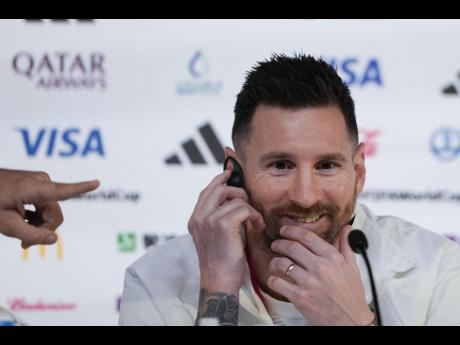 But there’s something different about Lionel Messi at the World Cup — a fact he acknowledges himself. He’s relaxed, he’s happy, he never stopped smiling in a rare appearance at a news conference Monday.

The pressure appears to have been lifted off the shoulders of one of the greatest soccer players of all time.

Look out the rest of the teams in Qatar, starting with Saudi Arabia on Tuesday.

“I don’t know if this is the best moment in my career, but I feel really well,” Messi said. “Maybe a bit more mature, always trying to give my best and enjoy everything, and live this World Cup with intensity and enjoy every moment.

“Before I didn’t think about that — I just wanted to play … and then think about the next game — and sometimes I missed a lot of things. I know a bit more now.”

With 22 of the 26-man Argentina squad playing at their first World Cup — two of them being 21-year-olds Thiago Almada and Enzo Fernandez — no wonder Messi feels like the veteran of the group at 35.

And again he said that this was “likely” going to be his last World Cup, even if that element of doubt might excite the more optimistic of Argentina fans thinking ahead to the 2026 tournament in the United States, Canada and Mexico.

Can the Albiceleste go there as titleholders? Maybe, since Messi is getting flashbacks to 2014 when Argentina made a run to the World Cup final — only to lose to Germany in the final.

It seems winning the Copa America to end a 28-year wait for a major title really has given Argentina belief, as well as being on a 36-match unbeaten run stretching back to 2019.

“We have just won a competition and that’s very reassuring,” Messi said through an interpreter. “It helps you work in a different way, you don’t feel as anxious. People don’t put as much pressure on you.

“This squad really reminds me of 2014. We’re very united and clear on how we wanted to play. It’s great to be here in such good form, because it gives you such confidence.”

One local reporter told Messi he loved him. The former Barcelona star was even applauded out of the news conference, where it was standing room-only in a convention centre in Doha.

Expect a similar reaction across Qatar over the next few weeks.

“I’m happy about all the love I can feel from everywhere in the world,” he said, gleaming.