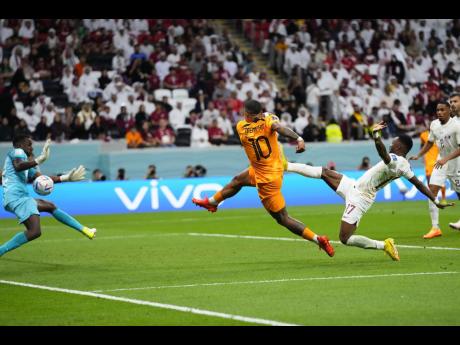 AL KHOR, Qatar (AP) — The Netherlands still has a long way to go to match the “total football” teams of the 1970s, or even the more offensive “Oranje” squads that reached the World Cup final in 2010 and finished third in 2014.

Still, a 2-0 win over Qatar on Tuesday ensured the Dutch advanced to the round of 16 by finishing first in Group A while the Qataris, who were already eliminated, became the first host to lose all three of its group matches at the World Cup.

“If you play against Qatar everybody will think and expect that you’ll win 5-0 or more, but this tournament has shown that it’s very difficult,” Netherlands midfielder Davy Klassen, who earned player of the match honours, said through a translator.

“We’re very critical of ourselves and we need to improve,” Klassen added. “But we have progressed and we’re going to move on.”

Cody Gakpo put the Netherlands ahead midway through the first half with his third goal in as many matches and Frenkie de Jong doubled the advantage five minutes into the second half.

The Netherlands is a three-time runner-up at the World Cup, and also finished third in 2014, while Qatar was making its tournament debut.

Qatar won the 2019 Asian Cup but the team’s Spanish coach, Felix Sanchez, said that tournament can’t be compared to the World Cup.

“We came here trying to compete and we managed to do that,” Sanchez said, adding that he wasn’t sure about his future status with the team.

“One of the things about our national team is that we have a long-term plan that doesn’t depend on me or anyone else,” Sanchez said. “We’re going to rest for a few days and we’re going to keep working and planning.”

The Netherlands, which failed to qualify for the 2018 World Cup, finished with seven points at the top of the group. Senegal, which beat Ecuador 2-1 in the other group game, advanced in second place with six points. Ecuador was eliminated with four points and Qatar ended up with zero.

The attendance at Al Bayt Stadium, which also hosted Qatar’s loss to Ecuador in the tournament opener, was given as 66,784 — nearly at full capacity. There were small pockets of orange-clad Netherlands supporters, and Qatar fans behind one of the goals chanted in unison and jumped up and down.

At one point during the second half, Qatar fans held aloft a large Palestinian flag that said “Free Palestine” on it.

In the 26th minute, Gakpo took control outside the area, dribbled forward and unleashed a powerful side-footed shot between two defenders that entered inside the right post.

Gakpo became the fourth Dutch player to score in three consecutive World Cup games after Johan Neeskens (1974), Dennis Bergkamp (1994) and Wesley Sneijder (2010). He also became only the second player to open the scoring for his team three times in the same group stage after Alessandro Altobelli for Italy in 1986.

“Cody Gakpo has everything it takes to become a star,” 71-year-old Netherlands coach Louis van Gaal said. “Plus he has a wonderful personality. He’s open minded to everything.”

De Jong’s goal came when he sprinted forward uncontested to knock in a rebound from close range following a shot from Memphis Depay.

A possible third goal for the Netherlands by Steven Berghuis was waved off following a video review for a handball in the buildup.

Berghuis then hit the bar in added time.

While the Netherlands dominated the possession and created many more chances, Qatar did push forward on occasion and there was a nervous moment for the Dutch when goalkeeper Andries Noppert had trouble collecting a long-range shot from Ismael Mohamed after Gakpo’s goal.

For club and country in all competitions this season, Gakpo has been involved in 35 goals in 29 appearances with 17 goals scored and 18 assists.

That should make the 23-year-old PSV Eindhoven forward the target for an expensive transfer in the upcoming months.