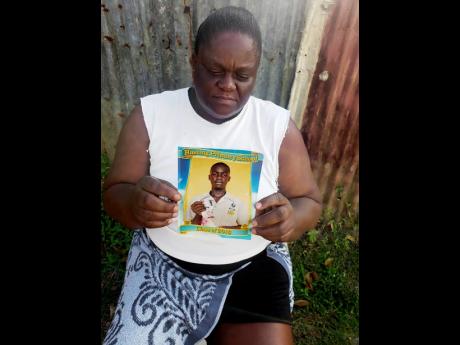 Natasha Roach, the mother of Khamal Hall, the William Knibb student who was stabbed to death at his school in March, has expressed disappointment over what she calls the "unfair" sentence imposed on his killer.

"Four years and 10 months, a dat mi pickney life worth? Him should get more," Roach said after the teen was sentenced yesterday.

Hall, 16, was stabbed to death at his high school -- William Knibb Memorial High -- by another student following a dispute over a guard ring on March 21.

High Court Justice Andrea Thomas said she arrived at the sentence after considering the defendant's age, his previous guilty plea in the Trelawny Circuit Court, and the psychological report which had been submitted for him ahead of the sentencing hearing.

The name of the 17-year-old male defendant is being withheld as he is a minor.

The teen, who was represented by attorney-at-law Marissa Dalrymple-Philibert, the Speaker of the House of Representatives, was first charged with murder but pleaded guilty to manslaughter.

Roach, while conceding that "there is nothing I can do" about the sentence, said she is going to "move on because it has been nine months (since Hall's death)".

The upcoming Christmas holiday will be Roach's first without her son. She told THE STAR that she has no idea how she is going to get through the holidays without him.