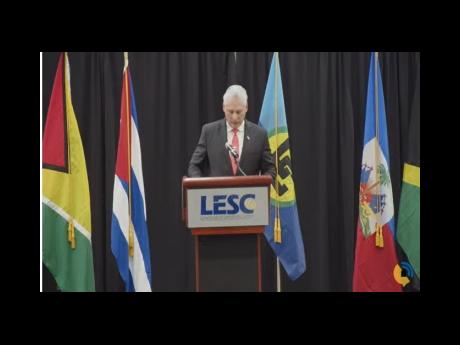 BRIDGETOWN, Barbados, Dec 6, CMC – Cuba Tuesday called on the international community to do more to deal with the political, social and economic situation in Haiti, where opposition forces and criminal gangs are seeking to remove the government of Prime Minister Dr Ariel Henry.

Addressing the eighth-Caribbean Community (CARICOM)-Cuba summit here, Cuban President Miguel Díaz-Canel, said as so many times during the course of history, Haiti is going through “a particularly complex situation.

“On behalf of Cuba, which is in favour of stability and peace in Haiti and which defends the rights of its people to find a peaceful solution by means of dialogue to its huge challenges, we here today express a willingness to continue offering a helping hand  to our sister nation.”

The Cuban president said that Havana is “urging other regional and international actors to help to look for solutions and concrete projects to provide resources and technologies which can be provided as substantial help to Haiti”.

Earlier this year, CARICOM) issued a statement in which it said it “is gravely concerned by the continuing deterioration of the security situation and the social circumstances” in the member country.

It said that the continued breakdown in law and order, and its distressing effect on the people of Haiti, is intensifying.

“The fraught situation is exacerbated by the inability of the Haitian security forces to address the ongoing violence. The unrest is having a negative impact on the already weak economy leading to even more mass demonstrations. Especially the worsening social conditions and the limited availability of food require urgent and immediate attention from the international community.”

CARICOM said it remains available to assist and work with international partners to mobilise financial and technical resources to facilitate a process towards normalisation and ultimately the holding of free, fair and credible general elections.

The political and socio-economic situation in Haiti has intensified following the assassination of President Jovenel Moise in July last year. Opposition parties have been staging street demonstrations calling for the removal of Prime Minster Henry, while rival gangs have been engaged in criminal activities ranging from kidnapping to murder.

They are also demanding that fresh presidential and legislative elections be held.

The United States and Canada have in recent months imposed sanctions on various Haitian politicians accusing them of using their offices or positions in society to further encourage criminal activities in the French-speaking Caribbean country.