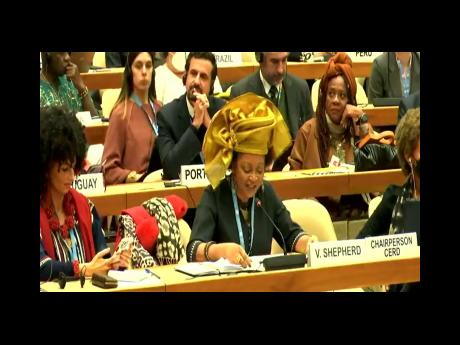 Bahamian, Gaynel Diana Curry, one of the five experts appointed earlier this year to serve on the United Nations Permanent Forum on People of African Descent, outlined the priorities for CARICOM, including reparatory justice, climate justice, systemic racism, and socio-economic opportunities, faced by vulnerable and marginalized groups of people of African Descent, especially women, children and migrants, and LGBTQI persons.

Barbados Ambassador and Permanent Representative- Designate to the United Nations and the  World Trade Organisation (WTO), Matthew Wilson,  said, ‘”what we have collectively launched today is for our ancestors and for our descendants still to come. It is brave. It is necessary. It is a long time coming.

“In the Caribbean there was a long history of advocating, articulating and agitating around issues of racism and the injustices inherent in post-colonial societies. In CARICOM these issues have been placed very high on its agenda, with the prime ministerial sub agenda on reparations being chaired by Barbados’ Prime Minister, Mia Mottley, with its core members, Guyana, Haiti, St. Vincent and Suriname”.

The CARICOM Reparations Commission (CRC) argues that European governments were owners and traders of enslaved Africans, Instructed genocidal actions upon indigenous communities, and created the legal, financial and fiscal policies necessary for the enslavement of Africans.

Professor Verene Shepherd, the Chair of the United Nations Committee on the Elimination of Racial Discrimination (CERD), said she is pleased that the forum had become a reality, after having held the post as a member of the United Nations Working Group of Experts on People of African Descent (WGEPAD) from 2010-2015, then served as Chair from 2012-2014, during which time she helped to draft the Programme of Activities for the UN’s International Decade for People of African Descent from 2015-2024 and made for its establishment part for advocacy of the international decade.

Using the Pan Africanist Marcus Garvey as an inspiration, she expressed hope that there would be e the implementation of the unfulfilled aspects of the Durban declaration for permanent action as it relates to the search of reparatory justice.

The Bahamas Ambassador, Patricia Hermanns, called for the Permanent Forum to be adequately resourced and to work toward balancing the scales of justice so no one is left behind.

Trinidad and Tobago’s Akilah Jaramogi who represents the United Maroon Indigenous Peoples also referenced CARICOM’s ten-point plan calling for a member of the Maroon community to be represented on the working committee of the forum, giving recognition of Maroons as African descendants of indigenous people.