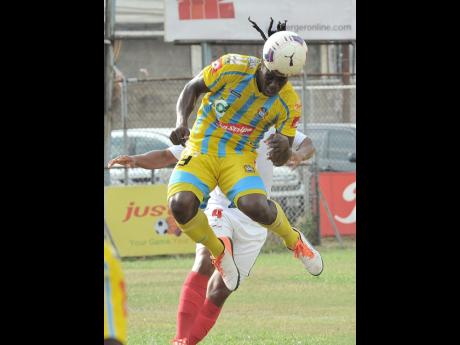 AGING Jermaine 'Tuffy' Anderson is certainly not slowing down, but his heart is not in representing the national men's senior football team anymore.

"My heart is not in that (representing Jamaica). Mi nah diss them, but I will just continue to do my thing in the premier league and help to lift Waterhouse." Anderson told STAR Sports recently.

"There is a lot of things going on with the national team. Look at Craig Foster, leading scorer last season and was not given any game with the national. He is much younger than I am," Anderson added.

The home side won 3-0, led by goals from Anderson in the 38th and 81st minutes. That was Anderson's third of the season, the same as Newton Sterling of reigning champions Arnett Gardens and Rafiek Thomas of Boys' Town. They are one goal behind Dino Williams of Montego Bay United in the race for the individual award.

"A just the work whey mi always try to put out. I try to stay healthy by eating good food. Everybody have to take care of their body, or it will break down. My job is to score goals," the 36-year-old said.

Anderson said he has been encouraged to go after Roen Nelson record in the Premier League.

Waterhouse started the season slowly and that has bothered Anderson.

"Everywhere I go, at work and in the community people asking me what is happening with the team, but I prefer to lose early as every team goes through a bad patch," he said.

Anderson first represented Waterhouse in 2008 and scored 76 times in 11 appearances. He has also played with Village United, Seba and Wadadah. He had a short stint at CD Aguila in El Salvador last year.