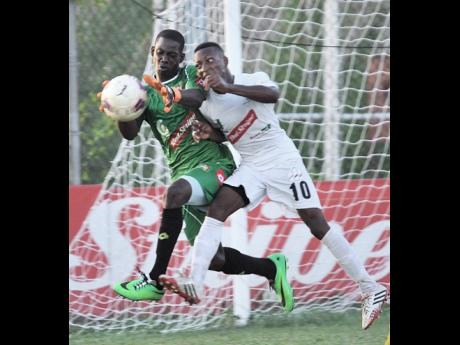 Defending champions Mico University stayed on course to retain their Greg Garrel Intercollegiate Knockout Football title after a hard fought 2-1 victory over the College of Agriculture Science and Education (CASE) in their quarter-final encounter recently at the Breezy Castle Oval in Rae Town.

Coming into the game after an easy 2-0 win over Caribbean Maritime Institute (CMI) in the second round two days earlier, the team from Portland was very competitive, and the defending champions nearly paid the price for missing several chances in the first half.

With less than five minutes to go in the game, CASE took the lead, but a determined Mico scored two goals in the final three minutes to book their semi-final spot.

There, they will face Exed Community College (Exed), who stopped University of Technology (UTech) 1-0 at home. The semi-final is set for Thursday.

Former champions G.C. Foster College are also through to the semi-finals after an easy 2-0 win at home over Knox Community College. The Spanish Town-based team will await the winner of the Brown's Town Community College and Moneague Community, College encounter, which will be played today. Heavy rain forced the cancellation of this game last Thursday.

This Saturday will also see the start of the Open Division One and Two League competition. Defending champion Mico University will journey to Portland to face CASE, and UTech will take on Moneague in Group One.

In Group Two, Knox will host G.C. Foster College, with Sam Sharpe Teacher's College doing likewise with the University of the West Indies.