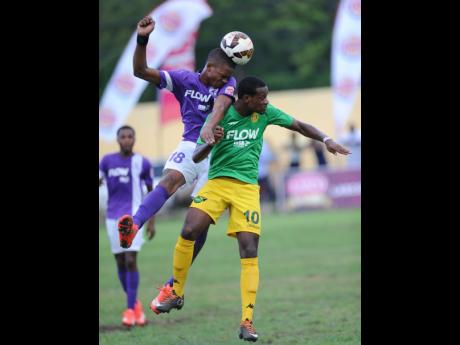 Coach of St Jago High Glen Laing and his players are determined to put the institution on the schoolboy football map this season, and so far they have done a pretty good job.

The Spanish Town - based school, whose only football title is the Walker Cup, finished as the best runner-up in their first round group, which also qualified them to the lucrative FLOW Super Cup and Walker Cup competitions.

But despite their good showing in the First Round, the Second Round is where Laing really wants them to make their mark and he believes he has the players, although he has one in particular that he looks to for goals.

Shaqon Bryan netted the opening goal seven minutes into St Jago's surprise 2-0 win over Kingston College in the Walker Cup quarter-final on Friday, taking his tally to nine for the season.

St Jago face the blue half on North Street, when they tackle St George's in the Walker Cup semi-final this afternoon at Constant Spring, and the speedy striker is aiming for more goals. He also knows there is no better way to announce their arrival to the big time than with a win over the mighty 'George's.

"The aim is always to win and I always aim for more (goals)," the forward told Star Sports.

"We are trying to put St Jago on the map and we are doing that. The team has grown a lot, because at the start of the season we didn't have a few players but we got them back and the team started working and now all is well," he continued.

The player and the team also have huge confidence in their coach, even though Bryan didn't agree with his part-time substitution role in the first round. He wants to live up to the mantle the coach has handed him in their objective.

"We are not finishing a lot of the chances we create but we are getting there, it's work in progress.

"Coach always tell me I have the team on my back and that I should carry them forward. I hope to do that as best as possible but coach knows best as his thing always work out at the end of the day," he said.