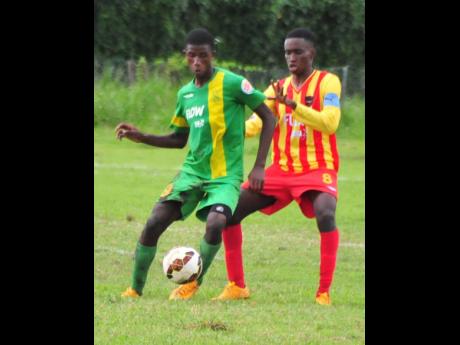 Maliki Reid's hat-trick led Petersfield to a 4-3 surprise victory over the much-vaunted Cornwall College at the Frome Sports complex yesterday, to secure their spot among the eight daCosta Cup inter-zone winners to advance to the Flow Super Cup.

At Jarrett Park, Rusea's found renewed hope with a 7-1 lopsided victory over Herbert Morrison to join Petersfield in the next round of the daCosta Cup to advance from Group 2.

It was a splendid display from the Westmoreland-based institution of historic proportions, as they have never before won against a Cornwall College team in Cup play.

Reid struck the opener in the 7th minute, then added his team's second in the 12th and rounded off a brilliant performance and team-leading sixth goal of the campaign, when he completed his hat-trick in the 34th minute.

Cornwall College, which was behind the eight-ball from the onset, after arriving 20 minutes late for the 3 p.m. kick-off, found some solace in attack when Peter-Lee Vassell found the net in the 22nd minute to cut the lead in half at 2-1.

But a 3-1 lead at half-time was always going to prove a challenge even to one of the most prepared teams in the competition, coupled with the fact that the thick grass and slippery underfoot conditions made it a little difficult.

However, they had their chances and should in fact have gotten the result they wanted, but Petersfield was simply quicker to the ball and more comfortable in a familiar environment.

Eight minutes into the second half, Donovon Brown struck a sweet free kick with venom into the Cornwall goal from 35 yards out to add insult to injury, and a 4-1 lead to delight his coaches on the bench.

The game then swung Cornwall's way again thanks to a 49th-minute goal from Giovanni Reid, but it soon after unravelled for the Dr Dean Weatherly-coached unit.

The referee was forced to show Stephen Hylton, a key Cornwall College defender, a straight red card in the 83rd minute for stomping on a Petersfield player, who was lying on the ground after his initial challenge.

Playing a man short, however, Cornwall showed some amount of determination to again score; Alrick Ottey this time netted in the 93rd minute, but it was little too late as their season came to a screeching halt.

"We finally get one over Cornwall and it is sweet," said Petersfield's assistant coach Dwayne Forrester.