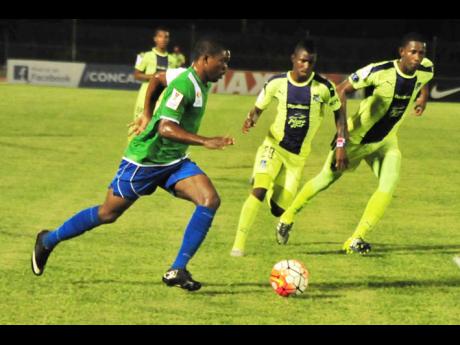 Montego Bay United (MBU), minus several regular starters, put in a below-par performance to end their campaign in the Scotiabank CONCACAF Champions League winless, after falling 1-2 to Panamanian club Deportivo Arabe Unido at the Montego Bay Sports Complex on Thursday.

Alan Ottey scored the only goal for MBU in the 89th minute in response to goals from substitutes Aramando Polo and Abdiel Arroyo in the 75th and 84th minutes, respectively.

Their lacklustre performance matched the poor turnout of supporters as they exited the league with good experience gained but with only one point from four matches.

That point came a month ago against DC United in a thrilling 3-3 finish.

DC United advanced from the group and into the quarter-final round with 10 points, while Arabe Unido also exited, but with six points.

After resting a number of his usual starters through injury and poor form in the case of goalkeeper Jacomeno Barrett, MBU coach Tim Hankinson, went for a younger line-up, with the former Green Pond High School striker Kashief Brown, playing the central striking role in the absence of Dino Williams.

Romaine Bowers' illegal challenge on one of their players inside the area in the 53rd minute.

The resulting sailed high over the bar, to draw the biggest cheer of the night from the few supporters on hand.

"They are an explosive team with polished strikers and we paid for not putting away our chances, of which we had many," Hankinson said.

"It was clear that they were better up front but, overall, I am pleased to some extent," he added.

He said with the Champions League out of the way, they now have the Premier League on which to extend focus.

"We are leading and we hope to keep it that way; the experience from this our first time in the Champions League will serve us well," said Hankinson.