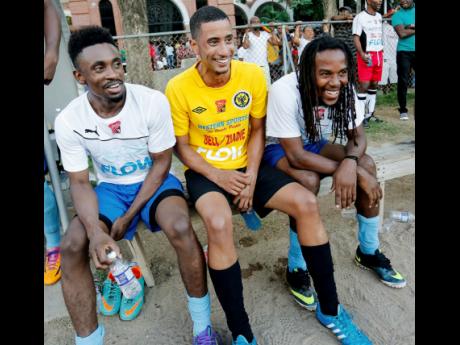 AIDED with a four-timer from Daryn James , former champions GC Foster College booked their ticket to the Intercol Greg Garrel knockout male football final after an impressive 5-1 win over Moneague Community College in their semi-final encounter on Thursday at the Spanish Town Prison Oval.

The Spanish Town-based team, determined to capture a football trophy this season following a drought last year, had a strong second half showing after both teams were locked 11 at the half time break.

However, with James' three goals coming in the second half, it was a dominant GC Foster College which took control in the latter stage for their overwhelming victory.

GC Foster will come face to face with defending champions, the Mico University College in the final.

The Michael Francis-coached Mico team was pushed all the way in their encounter between Exed Community College at the National Water Commission playfield.

Both teams looked scrappy during the encounter and after a goalless first half score it was centre forward Mikhail Jones who scored two minutes inside the second stanza to give his team a close 1-0 win and a chance to defend their title which they won for the first time last year.