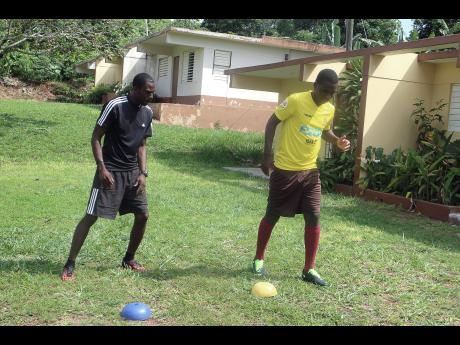 There is more to Romaine Walsh than what meets the eye. This 19-year-old Manchester High School centre forward says one of his best attributes is to make

"I am what you would call a people person; I love to make others laugh. I am a very friendly, jovial and determined person," he told STAR Sports.

Romaine, who hails from the community of Gayle in St Mary, is already a household name in his adopted parish mainly as a result of his exploits for the Donovan Dickie-coached Manchester High School daCosta Cup team.

Led by his 21 goals thus far, Manchester, with only one blemish against them, a 0-1 loss to defending champions Clarendon College in their opening inter-zone match one week ago, are into the last sixteen of the competition and are ready for all comers.

In fact, whenever Romaine Walsh scores, it's likely that Manchester will win. But football apart, it is his demeanour that sets him apart from the typical centre forward.

He was quick to heap praise on his teammates for their supporting role in him leading the race for the Golden Boot award for the top goalscorer, but he also pointed out that his talent is God-given.

"I believe it is a God-given talent I have. Scoring goals come naturally to me and I am just happy to be able to do so for Manchester High," said Walsh.

The youngster, who was spotted by Duckie playing for Volvo FC from St Ann last year in a Premier League play-off game and who then took the coach's offer to attend sixth form at Manchester High, says he intends to join the Jamaica Constabulary Force if football does not work out in the future for him.