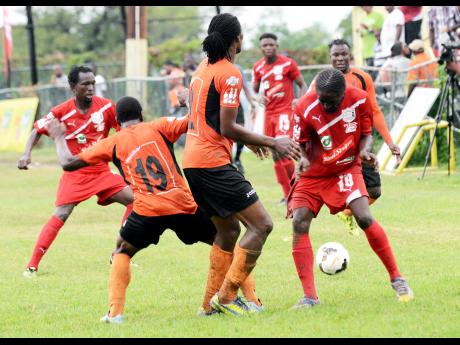 After three wins in three games, Tivoli Gardens have put their slow start to the Red Stripe Premier League season behind them. The Christopher Bender-coached team has jumped from 10th to third place in three weeks, with wins over rivals Harbour View, Waterhouse and Arnett Gardens.

Tomorrow, they hunt another big scalp when they tackle league leaders Montego Bay United at the Edward Seaga Complex at 3 p.m.

started with a 2-0 win over Harbour View before slamming Waterhouse 4-0 and then stunning Arnett 3-2, both away from home.

At home, and confident with Junior Flemming and Jermaine Johnson finding form, they will believe in their chance of taking three points.

However, Dino Williams has again found top form along with Owayne Gordon and Jermaine Woozencraft, which should make this game an entertaining one with goals.

Tivoli's coach, Christopher Bender, is pleased with the team's development. He said their recent form has re-energised the community and he wants to continue the with a win over the front-runners.

"We are playing at home and we are looking to impose our game. The confidence is up we just have to continue work hard and we will get the result," he said.

He is also wary of the league's topscorer, Williams (six goals).

Arnett Gardens, will look to bounce back against Waterhouse, but only a win is good enough to lift Waterhouse up the table. Humble Lion are favourites against UWI.

Cavalier should return to winning against struggling Boys' Town, while Reno will have a hard time ending their three-game winless run against second-place Portmore.