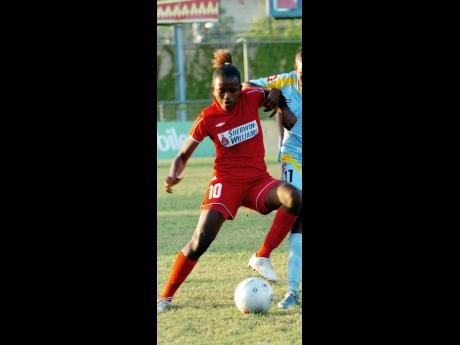 Tashana Vincent is away on national duty

With the experienced Monique Pryce, along with Melissa Bryan and Olivia Reid, dictating the early pace it was the home team that took control in the early stages of the game, putting the Mico team under pressure.

Both Keneisha Reid and Tashana Vincent have been a tower of strength for the top team Barbican so far this season and both were in tremendous form for Mico in the second half.

With both combining well, it was no surprise when the defending champion drew level 10 minutes after the restart as after a two-man combination, Vincent relayed a pass inside the 18-yards box to Danielle Wynter who easily -tapped home from some six yards to draw Mico level.

In another game on Monday, last year's beaten finalist the University of West Indies slammed Shortwood Teachers' College 9-0 at home.

The competition will continue next Wednesday with three matches. College of Agriculture Science and Education will host the University of West Indies; G.C. Foster College will do likewise to the University of Technology while Mico will journey to Mandeville to take on Northern Caribbean University. All matches start at 3 p.m.