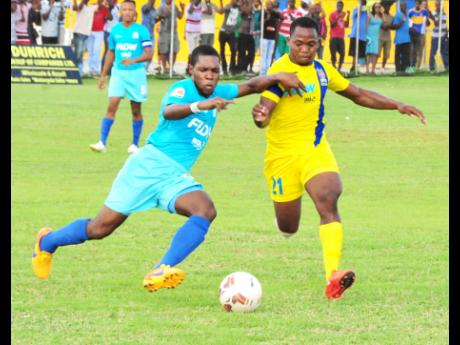 Malique Campbell fired in an 86th minute goal to give St. James a 1-0 win over Lacovia in their daCosta Cup Group P quarter-final match yesterday at Jarrett Park.

It is proving difficult to sort out the group, as Manchester High matched St. James by logging a 3-1 victory over Paul Bogle as all four teams now have four points from two matches.

On 29 minutes, Lacovia forward Oshane Staple smashed a right-footed effort towards goal, but found Aian Miller in goal for St. James in terrific form, as he twisted in midair to tip the ball onto the crossbar.

That was the closest Lacovia did come. Thereafter, it was practically all St. James. The only thing lacking was a goal.

But they did get the breakthrough and it came at an opportune time if fact, just before the ninety-minutes expired, when Campbell scored from the top of the eighteen yards box.

It was a good win, but still sees them behind the eight ball in a very competitive group, which is being led by Rusea's High on goal difference over Dinthill, after both schools played to an entertaining 3-3 draw.

The results mean that Clarendon College will need to win their final group match set for November 11 against Rusea's by a handy margin and hope that Glenmuir can hold Dinbthill to a draw, if they are to prolong the defence of their title.

St. Elizabeth again proved how devastatingly good they can be, by whipping Vere Technical 6-3 in Santa Cruz.

Kerr is now 25 goals for the season, and on track to hit thirty, if he keeps up his free-scoring form.

The next set of matches on November 11 will determine the teams to advance to the semi-final round.