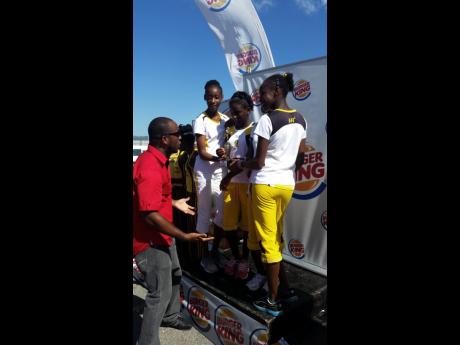 SINCE the introduction of the 4x1500-metre relays in the Burger King Road Race Series, during the Portmore 10K, the event has become popular. Sunday's staging was a testament to this as a record 46 high-school male, and 21 female teams participated.

One of the most improved middle- distance female-high school programmes around, Megan Wilson-Copeland-coached Spaldings destroyed top teams as Edwin Allen, St Jago and Holmwood Technical, leading from start to finish.

Lead-off runner Kara Grant gave her team to a 20-metre lead after the first exchange as Edwin Allen 'B', Manchester High and Edwin Allen 'A' were in a tight battle for second.

Second-leg runner Ann Marie Jones extended the lead after which Kimora Austin and Kimone Campbell went through the motions to give their team a good win in 15:41.

The large number of entries among the boys, resulted in the race being contested in two sections.

Defending champions Kingston College 'A' competed in Section A, along with St Jago High A and former champions, Holmwood Technical.

St Jago showed their strength as the quartet of Eric McKenzie, Leon Clarke, Joel Jon Pierre and young Keenan Lawrence on anchor took them to victory in 14:15.

Kingston College had to settle for second in 14:34. Holmwood Technical were third in 15:07.