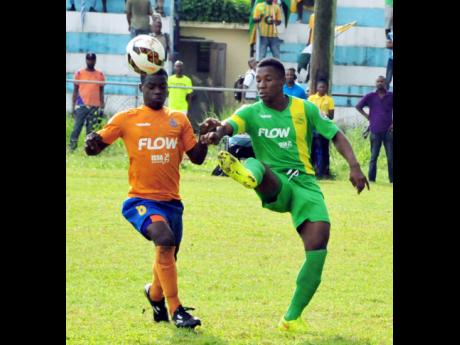 Clarendon College were left with a bitter-sweet taste in their mouths after defeating Rusea's High 2-0, but still had the daCosta Cup title ripped from their grasp in dramatic fashion, as Dinthill Technical advanced to the semi-finals as group winners with a comprehensive win of their own.

Dinthill made light work of Glenmuir High in yesterday's second match of a double-header at the Juici Field, winning 3-0 to take the top spot with seven points, one better than the outgoing champions, who were hoping for a Glenmuir victory, or a draw in that game to keep their title defence alive.

It was not to be, however, as the north St Catherine-based school eased to what in the end was a fine victory, to vindicate the technical staff's early season belief that they will be among the top schools at this end of the competition and retain a great chance to land their first daCosta Cup title since 1981.

At Frome Sports Complex, it was Lennon who stole the show with a hard-fought 3-0 win over Petersfield High to advance from Group Q.

Two goals from Rushane Grant in the 20th and 56th minutes, respectively, and a beast of a free kick from Jason Johnson in time added to the second half, propelled the Merron Gordon-coached team into the semis.

Manchester High also advanced yesterday, edging St James High 1-0 at Jarrett Park to move to six points, thus ending the hopes of the brave Lacovia High, who were held to a 1-1 draw by Paul Bogle High.

Last year's beaten finalist, St Elizabeth Technical High School (STETHS), need only a draw in their game later this afternoon at home against Manning's to advance, while Vere Technical will tackle Marcus Garvey High at Wembly Community Field, to see which qualify to the last four.

Semi-finalists Manchester, Lennon and Dinthill could be joined by STETHS.