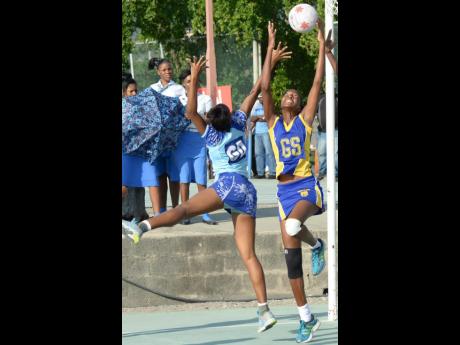 The defending champions topped Group Two with 13 points after another impressive win where they blew away Ardenne 51-12.

Camperdown finished as runner-up to Queen's in the Group on 11 points. Facing a must-win situation in their final game on Thursday, the Wayne Stewart-coached team got by Holy Childhood 22-19.

Gaynstead was perfect in topping Group One as they

continued their good form this season after a 26-14 win over the previously unbeaten Norman Manley for their fifth win in a row. The school ended on 15 points.

In the semi-finals, the defending champions will go up against Norman Manley while favourites, Gaynstead will meet Camperdown.

In the seniors' competition, defending champions, Queen's look set to top Group One as they have four wins in a row including a 55-19 win over Norman Manley in their latest game on Thursday. They will play Tarrant in a rescheduled fixture on Monday.

St Catherine High, Tarrant, Gaynstead and St Andrew Technical are in a battle to see who will join the defending champions in the semi-finals. All three teams are on six points.

It looks like a fight between Camperdown and last year's beaten finalist, St Hugh's in Group Two. Both teams are unbeaten and are on nine points each from their wins. On Thursday both teams had good wins.

St Hugh's was very impressive after a big 77-31 win over Meadowbrook while Camperdown dented the semi-final hopes of Holy childhood with an exciting 40-35 victory.

Camperdown and St Hugh's will meet on Monday and the winner here looks set to top the Group and avoid Queen's in the semi-finals.