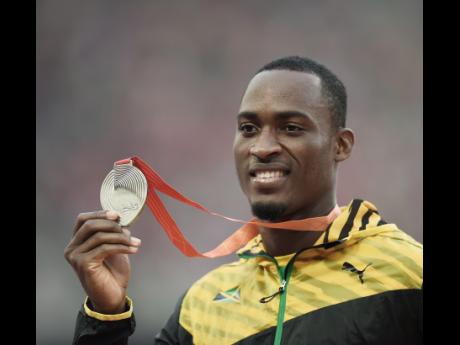 OLYMPIC and World Championships medallist Hansle Parchment will be making some adjustments to his 12.94 second record in the event in the coming months.

It's one of his key ambitions along with a gold medal, as he floors the pedal towards a new season, with the Olympic Games in Rio de Janeiro drawing ever closer.

His 12.94 was the only bright spark during a miserable year, last year when injuries and uncertainty was best exhibited in his disappointing fifth-place finish at the Commonwealth Games in Glasgow.

Still, Parchment, though pleased with his medal loot to date, is looking to add something a little shinier to his bounty and is hoping that an encouraging start to his background preparations will bring him closer to his aim of lifting Jamaican sprint hurdler to mind-boggling heights, in quite the same way another towering Jamaican did in the straight sprints.

"My preparations for the coming season have been much better than previous seasons. I have been feeling good so far, my background training has been going pretty well and even my coach is impressed with the work that is being put in at the moment, so I'm quite pleased and I feel if we can continue like this, we will have a very good season," Parchment told STAR Sports during a recent sit down.

"I'm looking forward to just going out there and creating a storm in the hurdles. I feel that If I can do what I have in mind, I can somewhat change the view of hurdling worldwide in Jamaica," added Parchment. "We have a lot of youngsters coming up right now who are doing really well like Jaheel Hyde, Michael O'Hara and Omar McLeod, so I am really looking forward to Jamaica on a whole taking charge in hurdling."