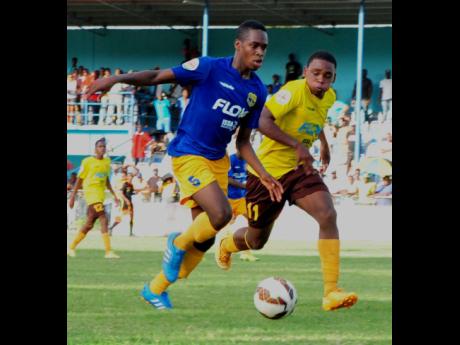 @Normal:Kamar Whyte (right) of Manchester High in action against Clarendon College's Romario Squire in a daCosta Cup Inter-Zone round match on November 26, 2015. Clarendon won the game 1-0.

Donovan Duckie, the head coach of Manchester High was left bitterly disappointed in last week's Ben Francis knockout final loss to St Elizabeth Technical but he must now refocus his players for this afternoon's daCosta Cup semi-final against Dinthill Technical.

The game will be played at the Juici Field with kick-off set for 2:30 p.m. and this time Duckie along with his band of players will want a more favourable result, one that will catapult them into the December 5 final against either STETHS or Lennon High, who meet tomorrow at the same venue.

Manchester did not have the best of days in the knockout final and will want to put that right to make the biggest finals of them all, the schoolboy rural-area football competition.

In order to get there, the likes of Duhaney Williams, the man who netted their only goal against STETHS in that final loss, must come to life. So too must Romaine Walsh and Jarious Mattis.

Their big centre half and team captain Bobeto Stewart along with his entire defence line must be able to keep Dinthill's attacking force at bay.

Dinthill have Rodave Murray, a talented forward-minded midfielder in their ranks. He is capable of creating serious problems for any defence. So too are Jahbari Ranger and Antoine Rhule.

The Linstead-based school is keen on keeping their dream of lifting a first daCosta Cup aloft for the first time since doing so in 1981 alive, by getting the better of Duckie's Manchester High in what can only be a high stake clash.

The last time Manchester reached the championship game they lost to STETHS and that was back in 2013, but this time around Manchester will be hoping of not only winning against Dinthill but to win a first ever daCosta Cup title.