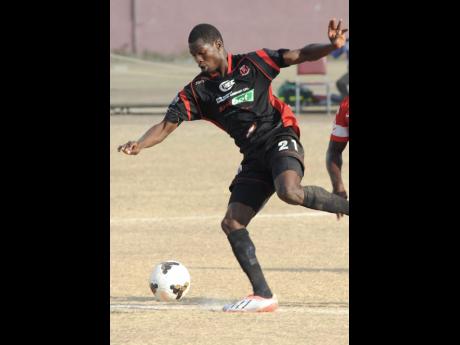 The lanky striker is consistently scoring goals in the Red Stripe Premier League and is the leading striker on 11 goals from 16 games.

Burke has been prolific in front of goal since national coach Winfried Sch%0fer called him in to the Reggae Boyz squad. His goal against Boys' Town in the 51st minute last Wednesday continued Burke's good form.

Adrian King netted for Boys' Town in the 70th minute, which earned his team a share of the points.

Burke troubled the Boys' Town defenders with his running on and off the ball, dribbling skill, and passing throughout the game. He certainly looked a better player since training with the Reggae Boyz although he is yet to play in an international game for the country.

Burke said his time in the national programme is paying dividends.

"Before I was called to in the squad, Dino (Williams) was leading. Now I am ahead. It was a wonderful experience training among professional players. I learnt that attitude is very important, and I also put in more work.

"My aim is to win the goalscoring award at the end of the season and also make the national team. I am very determined to do well," he added.

His coach, Harold Thomas, said the player has shown improvement in his approach to the game and that has helped the team.

With regard to the 1-1 draw against Boys' Town, Burke said: "I feel very disappointed as we got many chances, including a penalty."

Burke will have a chance to add to his goals when Rivoli face Humble Lion in the RSPL on Sunday at Prison Oval in Spanish Town.