LeBron James accused of causing Cavaliers coach to be fired 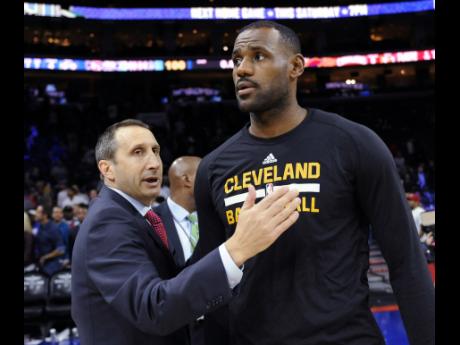 In this Nov. 2, 2015, file photo, Cleveland Cavaliers coach David Blatt pats LeBron James on the chest at the end of an NBA basketball game against the Philadelphia 76ers in Philadelphia. James’ calculating image wasn’t helped when the Cavaliers stunningly fired Blatt on Friday, Jan. 22, despite Blatt leading the team to the NBA Finals last season and an Eastern Conference-best 30-11 record this season. James has played for three coaches during his two stints in Cleveland, (AP Photo/Michael Perez, File)

James is being widely criticized in basketball circles for a perception that he pushed for Cleveland's front office to fire Blatt but James said the criticisms are unfair.

"But what can I do about it?" he said following shootaround on Wednesday as the Cavs prepared to play the Phoenix Suns.

"I've never, in my time since I picked up a basketball, ever undermined a coach, ever disrespected a coach," he said. "You ask any of my little league coaches, my high school coaches, coaches I've played for in tournaments, camps, my NBA coaches, I've always respected what they wanted to do."

Blatt was fired Friday midway through his second season despite having them atop the Eastern Conference standings and leading the team to the NBA Finals last season.

Blatt is the third coach fired on a team James has played on.

On Tuesday, a limited partner with the Heat said during an interview on Israeli radio that James tried to get Erik Spoelstra fired in Miami. Ranaan Katz later retracted his statement to the South Florida Sun-Sentinel.

Blatt was replaced by Tyronn Lue, his top assistant and a former NBA player who has known James since he was a 17-year-old high school phenom.

For many, Lue's ascension was the result of James not wanting Blatt around. There was an obvious disconnect between James and Cleveland's former coach, who was wildly successful in Europe and hired by Cleveland before James decided to return to the Cavaliers as a free agent in 2014.

The James-Blatt relationship was scrutinized during both seasons and when it finally collapsed, the "LeBron-got-him-fired" narrative gained traction.

James said his willingness to speak his mind has led to the criticism that he's not always on the same page with his coaches.

"People get it so misconstrued because I'm a smart basketball player and I've voiced my opinion about certain things, which I did when I was here my first stint with Paul Silas and Mike Brown. Which I did in Miami with Coach Spo. Which I did with Blatt and I'll do with T. Lue," he said. "And at the end of the day, they'll still have their final call. But, I don't know. What do you guys want me to do, turn my brain off because I have a huge basketball IQ? If that's what they want me to do, I'm not going to do it because I've got so much to give to the game.

"There's no difference for me telling my teammates or telling guys how to get better with their game. If I feel I got something that will help our team, ultimately, I like to give it. It helped me get two titles," he said.

Whether it's James' words or actions, everything about him is scrutinized. That's the price of being one of the planet's most popular athletes.

Still, James has been bothered by some of the recent vitriol directed at him.

"People want to throw my name in dirt for no particular reason, because of speculation or whatever the case may be," he said. "But you can't worry about it too much. I got 14 guys here. I got a fan base here and a fan base all over the world that loves what I do and they respect what I do and I can't worry about a select group of people that want to use their negative energy to take away my positive energy."