We support our hurdlers - Digicel 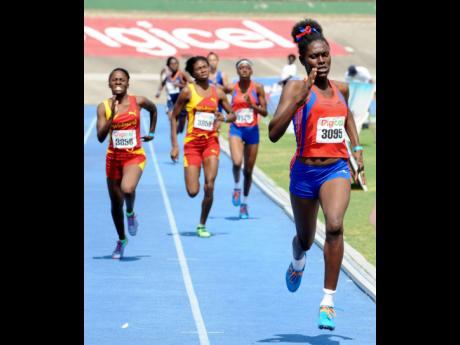 @Normal:Michelle Burger of Camperdown High leads the field on her way to winning the girls Class One 800 metres during the 2015 Corporate Area Development Meet, part of the Digicel Grand Prix Athletics Series.

Communications provider Digicel said while no hurdles event is included in its six-meet Digicel Grand Prix Athletics Championship, hurdles races are included in other meets sponsored by the company during the track and field season.

Digicel was responding to an article written by STAR Sports' Raymond Graham, who called it a "big mistake" that, once again, hurdles were omitted from the series, now in its second year.

However, chairman of the championship's technical committee, Maurice Wilson, said whereas hurdles events are not included in the Grand Prix series, they feature in other meets sponsored by Digicel.

"So we are not omitting them," Wilson said in a statement.

"When the technical committee sat down we put a lot of thought into deciding which events should be included in the Grand Prix. The events chosen were to ensure that we would produce a highly competitive and entertaining series, while still developing those events that aren't so popular such as the high jump," Wilson added.

"This is just one of the ways that we are building on the growing dominance that Jamaica is creating in hurdles. We offer training in the hurdles at all five of the athletics training camps that are held from October to November," Lloyd added.

Wilson, in the meantime, said adding the hurdles would be considered for future stagings of the Grand Prix series.