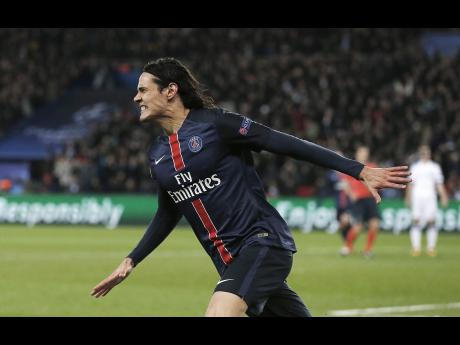 Paris Saint Germain's (PSG) Edinson Cavani celebrates after he scored the winning goal during yesterday's Champions League round of 16, first leg match between PSG and Chelsea at the Parc des Princes stadium in Paris.

Struggling striker Edinson Cavani came off the bench to score the winner as Paris Saint-Germain beat Chelsea 2-1 in a pulsating first leg in the last 16 of the Champions League yesterday.

Cavani, who has lost his place in the side in recent weeks, latched onto a superb pass over Chelsea's stretched defense from winger Angel Di Maria and slotted through the legs of goalkeeper Thibaut Courtois from a narrow angle in the 78th minute.

Zlatan Ibrahimovic put PSG ahead with a powerful free-kick in the 39th minute, only for Chelsea to level against the run of play on the stroke of halftime with a rare goal from midfielder John Obi Mikel.

Courtois made a string of saves to keep Chelsea in contention heading into the second leg, and Spanish winger Pedro almost spoiled the home celebrations in injury time with a rasping drive into the side netting.

PSG are unbeaten in domestic competition since March and in all competitions since a 1-0 reverse away to Real Madrid in the group stage on November 3 a run of 23 games.

Still, coach Laurent Blanc's side could regret a host of missed chances and Chelsea will fancy theri chances at Stamford Bridge in three weeks' time.

Chelsea knocked out PSG in the quarterfinals two years ago and PSG won when they met at the same stage last season - with both ties settled on away goals.