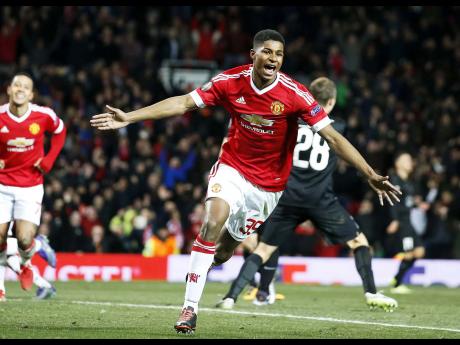 Manchester United's Marcus Rashford celebrates after scoring during the Europa League round of 32 second leg match against FC Midtjylland in Manchester, England yesterday.

Villarreal stunned Italian high-flyers Napoli; Valencia cruised through 10-0 on aggregate; Sevilla progressed despite losing 1-0 away to Norwegian side Molde, and Athletic Bilbao edged out Marseille 2-1 on aggregate.

German side Borussia Dortmund also got through after comfortably eliminating Porto.

The pressure has been mounting on United coach Louis van Gaal in recent weeks and reached near-breaking point when United lost the first leg 2-1 last week.

Elimination may have ended Van Gaal's fractious reign and the signs were starting to look ominous with Wayne Rooney sidelined through injury and fellow forward Anthony Martial was injured in the warm-up giving the Manchester-born Rashford an unexpected opportunity.

Nearly 12 years ago, Rooney was 18 when he started his own United career in emphatic style netting a clinical hat-trick as United swept aside Fenerbahce in the Champions League and this time Rashford thrilled Old Trafford with two second-half strikes.

That followed another sluggish United start, as Pione Sisto put the visitors ahead with a fine individual goal, having also scored in the first leg.

United equalised courtesy of an own goal from centre-half Nikolay Bodurov four minutes later but then missed a penalty as Juan Mata's spot kick was saved by goalkeeper Mikkel Andersen.

Meanwhile, midfielders Ryan Mason and Erik Lamela grabbed a goal each as Tottenham beat Italian side Fiorentina 3-0 to go through 4-1 on aggregate. In Naples, Marek Hamsik levelled the tie against Villarreal with a fine volley from just outside the penalty area, but midfield counterpart Tomas Pina levelled to send the visitors through 2-1 overall.

Earlier, an early penalty from midfielder James Milner was enough for five-time European champion Liverpool as they scraped past German side Augsburg 1-0.