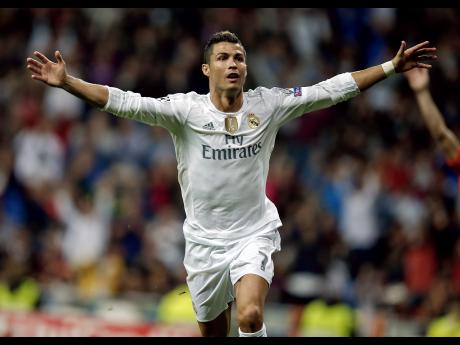 Real Madrid and Atletico Madrid will try to keep their title hopes alive when they meet in the city derby this weekend. The losers at the Santiago Bernabeu Stadium today will virtually be left with no chance of winning the Spanish league.

Atletico are eight points behind Barcelona, while Real Madrid are nine points back going into the 26th round. Barcelonan who can tie Real Madrid's record of 34 unbeaten games in all competitions set in 1988 and 1989, host fifth-place Sevilla tomorrow.

Real Madrid and Atletico are coming off disappointing draws in the league, but Madrid go in with an edge as they have won seven straight at home, outscoring opponents 37-7.

Real Madrid's last setback at the Bernabeu was the 4-0 defeat to Barcelona, which eventually led to the replacement of coach Rafa Benitez by Zinedine Zidane.

Atletico can take comfort by having won the last two league games against Real Madrid at the Bernabeu.

The first Madrid derby this season ended in a 1-1 draw at Atletico's Vicente Calderon Stadium.

"It will be a great derby," Atletico Madrid defender Filipe Luis said. "Real Madrid is very strong when playing at home, but we are one of the best teams in the league when playing away. We know it's going to be a game decided by details. We have to be as prepared as ever."

Barcelona will try to increase their lead against Sevilla, the last team to defeat the defending champions.

After the 2-1 loss at Sevilla in the league's seventh round in October, Barcelona have gone on a 33-game unbeaten streak.

The game at the Camp Nou will be a preview of the Copa del Rey final as the teams will play on May 22.

With Lionel Messi, Luis Suarez and Neymar thriving, Barcelona will be looking to win their ninth game in a row at the Camp Nou, where its last setback was a 2-2 draw against Deportivo La Coruna in December.

Cristiano Ronaldo has thrived at the Santiago Bernabeu, scoring seven goals in his last three games at the stadium.

He scored two goals in the 4-2 win over Athletic Bilbao, three in the 6-0 rout of Espanyol, two again in the 5-1 victory over Sporting Gijon, and the Portuguese striker also scored in the 1-1 draw at Malaga last weekend.