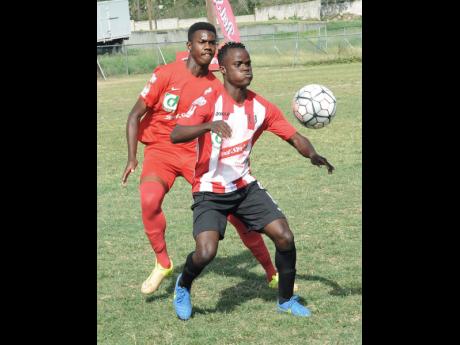 Inspired by their experienced team leaders, forward Girvon Brown and Nicholas McMorris in defence, the newcomers took the lead through Brown, who tied his best tally of 12 goals for a season when he netted from the spot after 23 minutes. They extended their lead five minutes into the second-half when McMorris assisted Anthony Greenland after a brilliant counter-attack.

McMorris said the win was a big statement of their growth and development since the start of the season, following a 3-1 defeat by Arnett on the opening day. Yesterday's result also put them in pole position to advance to the last four.

"It was a very important win, we have a couple teams challenging us for that fourth spot so we need to keep winning. We have three games left and we are fourth. But it's great to beat Arnett," McMorris said.

UWI are fourth on 42 points, one more than Humble Lion, which stopped Waterhouse (28 points), 2-0 at Effortville. Harbour View (39), came in the round tied with UWI, but lost ground for a semi-final berth after their 2-1 defeat by Boys' Town (38) at Collie Smith Complex.