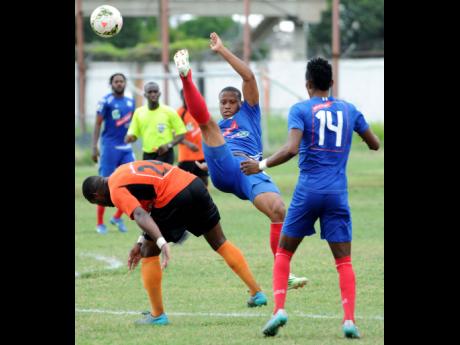 Portmore United will have their sights set on the million-dollar prize for topping the Red Stripe Premier League (RSPL) preliminary round, while UWI will be firmly fixated on sealing the last semi-final spot when the teams meet in the feature (RSPL) game today at Juici Park.

Portmore lead the points table with 60 points, three more than Arnett, who are one point in front of MoBay United. However, tentatively holding on to fourth spot are league debutantes UWI (45), and they are being closely pursued by Humble Lion (44) with two matches to go.

A win for Portmore would put them closer to the million dollars, and with three wins from their last four games and only one loss in five matches, the St Catherine team will be confident of making it three wins on the trot. However, UWI have only lost once in five outings and they too are hunting three straight wins. With a first-ever semi-final appearance as their motivation, the university team will be all fired up for this contest.

At the other end of the table, Waterhouse, who are all but relegated, have one final attempt to salvage their season, although not even a win might be enough to save them from the drop, as other results would have to go their way.

Reno also need to avoid defeat to secure their RSPL status for next season.

Humble Lion will be depending on UWI to drop points so they can overtake that vital fourth spot.