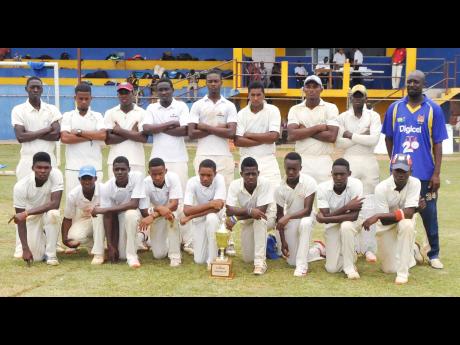 "Since then, we have been using the same model to fire the confidence in each player," Ledgister said.

STETHS won the Headley Cup for a record 28th time in the school's history, and retained the all-island Spalding Cup with a thorough 10-wicket victory over Grace Cup champions Excelsior. The victory gave them title number 18.

They are also the only school to have won the High School's T-20 competition since its inception three years ago, defeating Vere Technical in this year's final, a compelling fact that puts into context the success of the STETHS cricket programme.

Ledgister said there will be no letting up as the school builds on the reputation of being Jamaica's unofficial cricket 'factory'.

It is a suitable tag for a school cricket programme that has produced top quality players at various levels, including fast bowler Jason Dawes, Nicholson Gordon, Donovan Nelson and Marquino Mindley.

STETHS has also given us Ramaal Lewis - the former West Indies U-19 skipper.

Current U-19 players Michael Frue and Shahid Crooks were part of the regional side that won the U-19 World Cup in February.

Ledgister says for any team to replicate STETHS' success they must first begin by putting in place the best possible facility.

This is where STETHS players hold a significant advantage over their rivals. The school boasts six concrete wickets for "training players in the right techniques," Ledgister noted.

"All the successful schools in whatever sporting discipline will tell you that the players/athletes are given full backing by the school's administrators".

He credited school principal Keith Wellington and the rest of the staff.

The last time STETHS failed to win the Headley Cup was in 2013, when Manchester High wrenched it from their vice-like grip.