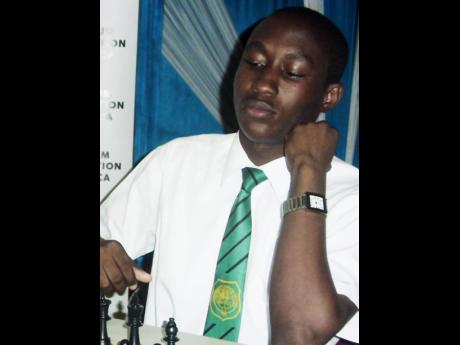 National junior chess champion, national Master Shreyas Smith described his final match against Maluku Lorne at the Robert Wheeler Open Chess Tournament, at the Petroleum Corporation of Jamaica Auditorium and Liberty Academy at The Priory last Sunday, as the hardest he has ever played.

The Calabar High School student credited his time management and mental preparation as the key to his victory.

"I am in exams right now, so I wasn't doing any training that I would be doing on a regular basis. So going into the tournament was like a break or a stress relief. I just wanted to have some fun being that it is my last year as a student playing," he told STAR Sports.

Smith was perfect throughout the tournament, winning his six matches to score a perfect six points, and in the final, he overcame the country's most high-profile player in Lorne.

"Victories help to motivate you in any sports. The more you win, the more your confidence builds. So it is a little easier when you have confidence and victories on your side," he said.

"It was probably my hardest match. It was a very long and a fighting game," he added.

Smith was also first in the under-20 section and received top mention in the 2100 to 2199 FIDA rating category.

"Winning the championship is a strong motivator. It gives me confidence to know that I have the ability. I want to see if I can get an international masters title as near in the future as can be."

Only four other local chess players have ever got higher total ratings.