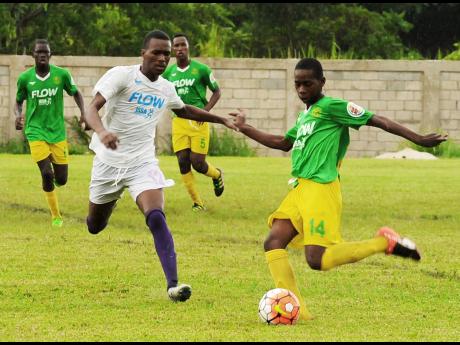 @Normal:Chevon Duncan (right) of Green Pond High looks to clear the ball upfield before he is challenged by the onrushing Jahmari Reid durin a Zone A ISSA-FLOW daCosta Cup football match, which ended in a 1-1 draw at Irwin High School.

A persistent and heavy downpour made the Zone A ISSA-FLOW daCosta Cup game between Irwin High and Green Pond a wretched experience, but in the end, the 1-1 draw, according, to the coaches of the respective schools, was a fair result.

There were puddles of water all over the field by the scheduled kick-off time and to make matters worse the bad weather accounted for the late arrivals of the referee's assistants.

When they did arrive, a decision was taken to play two halves of 40-minutes each, as the match was already 40 minutes late.

When action got under way, Green Pond settled the quicker, but failed to take advantage of their early ball possession.

Forward Evardo Chambers missed two chances, which his coach Gregory Daley felt he should have done better with, but he did score his team's all-important goal in the 37th minute.

A pass was floated into the area and the short, but powerfully built forward leapt high to send the ball looping over Ryheem Vassell in goal for Irwin.

With their new coach, the experienced Anthony 'Follis' Williams pulling the strings, Irwin went all out for the equaliser. They got it seconds from full time when during a melee in the six-yard box the ball found its way over the goal-line.

"This is a work in progress for us," stated Williams, "It was a spirited performance from the players, and the wet conditions didn't make it any better for us."