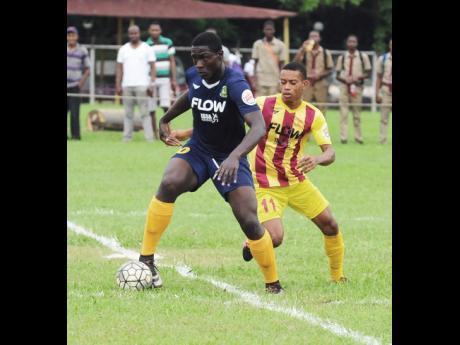 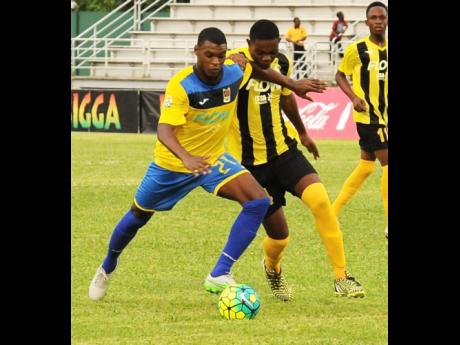 file Jovoney Brown (left) of STETHS has scored five goals since the start of the season.
1
2


Western Bureau
While there will be a number of high stakes ISSA/FLOW daCosta Cup matches set for this afternoon but the spotlight will be on the Zone E derby featuring St Elizabeth Technical and Munro College in Santa Cruz is promising to do.

Over the years, this matchup has taken on a significance that has transcended a mere football spectacle and is arguably the competition’s biggest rivalry, even laying down a challenge towards the Cornwall College/Rusea’s derby at its heights in the 90’s or the Clarendon College Vere Technical one-two punch of the eighties.

STETHS has been the more successful in recent years obviously but Munro and their supporters still pride itself as the standard by which all others should be judged in St Elizabeth and so will not go quietly and cede STETHS the throne.

When they meet this afternoon, several intangibles will be in play. Namely, STETHS, who are first in the zone on goal difference over Lacovia (both have nine points), will be on familiar home turf in Santa Cruz and will be backed by their band of rabid supporters.

STETHS will also be taking the field without one of their most lethal strikers in Romeo Wright, who suffered a broken leg in a recent match against Maggotty.

The defending champions will still be smarting from that shock 1-0 loss to Lacovia on Thursday.

Munro, meanwhile, third in the zone with eight points, have been getting more than satisfactory results recently to include a strong fight back to secure a draw against Maggotty. The Lance Morgan-coached Munro then slapped a solid 6-1 spanking on Black River in preparation for today’s derby.

“We are aiming to top the zone. We haven’t done so in a number of years, but we like our chances this time around against STETHS,” Morgan told STAR Sports.

“I am expecting a humdinger of a contest in Santa Cruz. Two of the best teams in the zone and more a Munro versus STETHS contest is always going to be an exciting affair. It should be interesting,” Morgan said.

And it is promising that and much more. As STETHS coach Omar Wedderburn stated, his team will be taking the attack to Munro.

“All our frustration will be taken out on this Munro team. We lost against Lacovia and while it’s not really a setback, we want some form of revenge and so it is that we meet Munro next,” reasoned Wedderburn.

Another hot-button matchup is in Zone A, where St. James high will tackle Cornwall College. Both teams are locked on maximum 12 points from four matches and have looked impressive doing so.