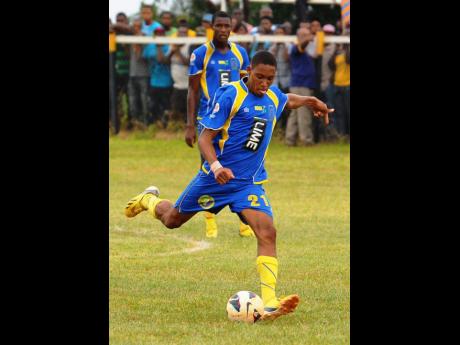 More than a thousand goals have been scored in the approximately one month of action in the 2016 Inter-Secondary Schools Sports Association (ISSA)-FLOW daCosta Cup.

The race for the title of top goalscorer is heating up. The race for that crown is being led by Glenmuir's Jevaughn Ennis, whose 16 goals have his team primed for a spot in the Inter-Zone round.

Ennis has been in splendid form, having struck three hat-tricks and a five-timer leading the line for the former winners. He stands alone upfront, with Jovoney Brown of St Elizabeth Technical High School (STETHS) on 11 goals, his nearest challenger.

Gavin Roberts of Garvey Maceo and Jourdaine Fletcher of Cornwall College are joint third with 10 goals so far.

However, they will have plenty of work to do if they are to challenge the all-time daCosta Cup record for most goals scored in a season. That honour belongs to the incomparable Brian Brown of Rusea's, who racked up an amazing 38 goals in 2011.

Brown was a class apart and it was evident given his record. The sight of Brown on the attack meant one thing to Rusea's supporters - a sure goal - and his record of 38 goals still stands as testimony of his skills.

strikers in the daCosta Cup