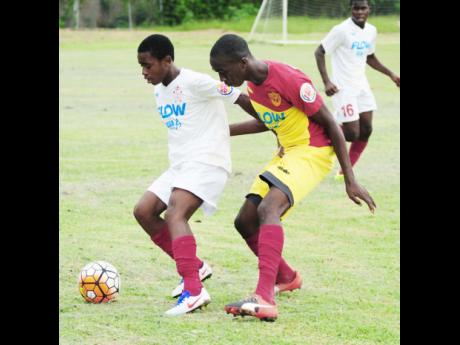 @Normal:Spot Valley High School forward Andre Gardner (left) is one of the players head coach Gregory Palmer will be looking to help stave off the challenge posed by Little London High in their crucial quarter-final ISSA/FLOW daCosta Cup game this afternoon at Jarrett Park.

Coach of Spot Valley High, Gregory Palmer, has stated that getting to the ISSA-FLOW daCosta Cup quarter-final stage is like tonic to his team and now they have their sights set on a first ever title.

The 11-year-old school is enjoying its best ever season in the competition and will tackle another of this year's surprise packages, Little London High, in the first match of a Jarrett Park quarter-final double-header this afternoon at 1 p.m.

"Londoners" but was quick to brush aside any hint of over confidence.

"I will say we are confident of doing well against a very good Little London side but we will not be over confident at all," he said.

"In fact, if anything, my players are just delighted to have come this far. I see the belief in their eyes and I hear them speak of what it would mean to reach the semis."

Dubbed as one of the groups of death, Spot Valley finished second behind Rusea's in the inter-zone round on four points but ahead of the likes of Godfrey Stewart and St James High in Zone Two and now will for their first ever daCosta Cup quarter-final.

"It is historic. But it's also what we want," Palmer said. "It's going to be two schools in this position for the first time, playing quality football. It couldn't get any better except that we hope that after 90 minutes that we are the winners," he added.