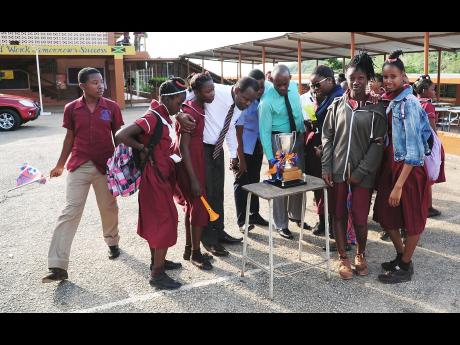 "Today's hard work, tomorrow's success', is not just a motto for Lennon High School, it's also a way of life and the school's recent victory in the final of the Ben Francis Cup embodies the full meaning of it all," principal of the school, Dr Donald Johnson, said yesterday.

"Some people classified us as the underdogs at the start of the season. That label has been scratched out. This fine victory to capture the title embodies in exactly the right way, what our motto means," he added.

He said the dream of winning a boys' title, after claiming seven for the girls' football team over the years, says a lot about preparation, discipline and hard work.

The principal was full of praise for coach Merron Gordon and the rest of the coaching staff, describing them as a very special part of the fabric of the school.

"This has placed us in the limelight," he stated, "People, who normally think of Mocho as a 'backabush', unknown place, now see us a place that nurtures champions. Nothing is greater," said Dr Johnson.

He added that after watching his school put away the previous six-time champions STETHS 4-2 on penalties in the final, that it dawned on him that the significance of the moment transcends the school.

He said the entire community and the parents of the players, teachers and all associated with Lennon are celebrating the history-making endeavour of the team.

"The celebration will not end today; this will go on for quite a while, because this is monumental," reasoned Dr Johnson.

"We are now officially part of the big leagues, the elites. We will continue to show how great Lennon High School is and hopefully, when this is all said and done, we will be crowned daCosta Cup winners also," he said.