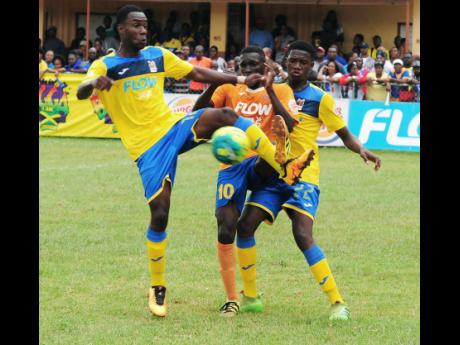 Losing the Ben Francis KO title stung hard, but the sting may just be what defending champions St. Elizabeth Technical High School (STETHS) needed to keep their minds firmly focused on holding on to the prized ISSA-FLOW daCosta Cup.

However, Lennon, still high after stopping the STETHS knockout juggernaut from reaching a record seven straight, will no doubt have something to say about it when the two meet in what is expected to be another tense affair in this afternoon's 2016 daCosta Cup schoolboy football semi-final.

This is a competition that the STETHS players, and indeed their coach Omar Wedderburn, will admit is the big one.

"All my players are up and ready. I made no bones about how significant this daCosta Cup title is to us. We are going out there to win and move into the final," said Wedderburn.

A win for STETHS over Lennon would mean a fifth successive daCosta Cup final, but it would mean much more if they stop Lennon.

"We have the players to do the job. We lost the knockout title to them, but we will not surrender the daCosta Cup," added Wedderburn.

Without top scorer Jovoney Brown (foot injury), it will be up to the likes of Glendo Gopaul, Alex Thompson, Demar James and Chris-Andrew Dixon to deliver big time. There can be no excuse.

Meanwhile, for Lennon, it's a simple equation. Keep James, Thompson and Dixon quiet, play hard and compact in defence, and take the chances they will surely get.

Last year, Lennon fell at this stage, but buoyed by their recent success, it is expected they will be taking this one really seriously, as expressed by their team captain Fitzroy Cummings.

"We are hoping to defeat STETHS again and take our place in the final. I believe we can do it for our school and the community," said Cummings.