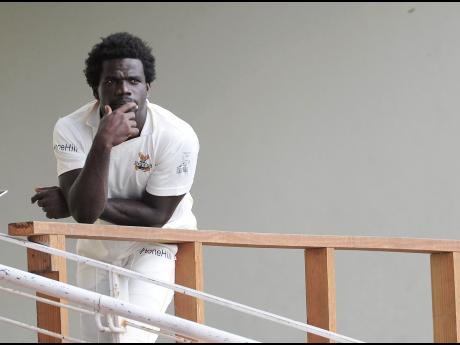 Coach Robert Samuels has added his voice to the state of the outfield at Sabina Park whenever it rains, saying that currently, it is unbecoming of an international venue.

The outfield, which was renovated 10 years ago in time for the 2007 ICC Cricket World Cup here in the Caribbean, has been churning up wet, muddy, and soggy conditions in recent weeks whenever there is a little rain.

This, it is believed, is as a result of poor drainage facilities, which has caused the rainwater to hover above the surface of the outfield rather than filter away.

"We lost an entire day's play due to a wet, soggy outfield, which is unbecoming of an international venue like Sabina Park. And, the in last game, we also lost some time, too," said Samuels.

"Sabina Park needs to get their act together in terms of what they need to do to ensure that the ground is what it used to be 10 years ago when it was refurbished," he added.

The muddy and soggy outfield last week caused several sessions of play to be abandoned during the Digicel WICB Four-day Championship clash between Jamaica and the Windward Islands Volcanoes.

It has also resulted in the first day of the ongoing contest between Jamaica and leaders Barbados Pride being abandoned last Friday, as well as much of the final session on Day Two and Three on Saturday and Sunday.

Sabina Park is owned and operated by Sabina Park Holdings, which is a consortium of entities that include Kingston Cricket Club and the Jamaica Cricket Association.