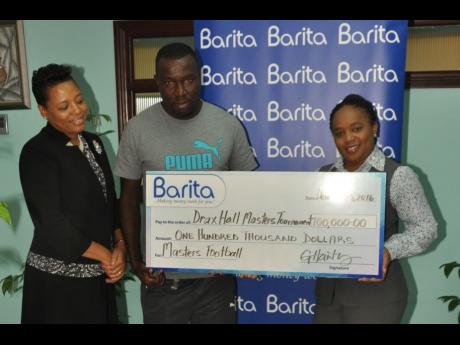 Whitmore He will be joined by the likes of Norman Foster, Hector Wright and Warren Barrett.

Violet Tourers won the title on penalty kick last year courtesy of a 3-2 win over Browns Town in the final, after the teams played out an entertaining 1-1 draw in regulation and extra time.

And while Violet Tourers boast the bulk of former national players, the other clubs also have their compliment of stars in their side.

The competition is being titled sponsored by Barita to the tune of $100,000. Associate sponsors include Clinicare Pharmacy, Smoke Marlin Restaurant, UG's Cellular and Selbys Transport.

St. Ann Masters, Harbour View and Los Perfectos will pay out of Zone A., while defending champions Violet Tourers are joined by Portland Masters and Kingston Commissioners in Zone B.

The winners of each zone and the runners-up will advance to the semi-finals, where the winners will meet to decide the champions.