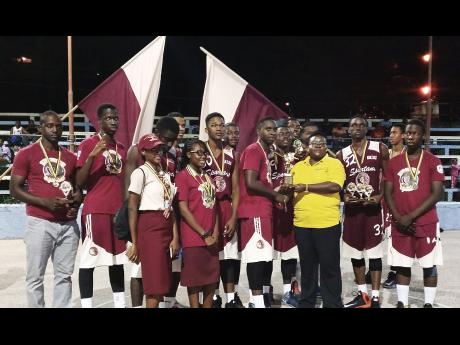 Herbert Morrison retained both their Under 19 and Under 16 Inter-Secondary Schools Sports Association Western Conference Basketball tiles with commanding wins over Cornwall College in championship deciding Game two on the weekend for a third-straight hold of the respective titles.

Leading the two-game finals series 1-0 coming into Game Two, Herbert Morrison needed no invitation to put away their opponents.

They won by 13 in the U-16's, getting the better of Cornwall 54-42 with Davaughn Campbell top-scoring with 22 points.

It was much the same in the U-19 section, as Herbert Morrison underlined their status as the best in western Jamaica for yet another dominant year, in a 73-49 blowout win.

Four of their starters ended with 12 points or more, with Shaquille Benti leading the way with 13 points.

Vassell was named U-19 MVP for his stellar season and his school's 14th title overall in both divisions and continue an impressive showing for head coach Dave Black.

"It was relatively easy this year for us. The players each knew how we wanted to play and we did that in retaining the title," Black stated.