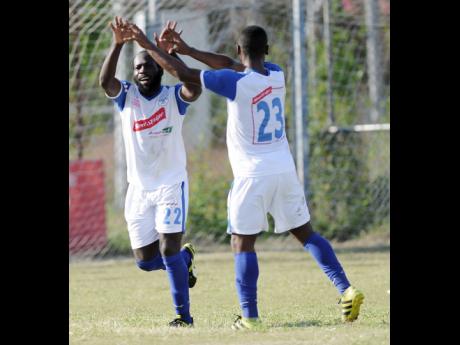 Craig Foster (left) celebrating a goal against Waterhouse with then teammate Javed Richardson of FC Reno in their Red Stripe Premier league encounter at the Drewsland Stadium last season.

Craig Foster has scored three goals and provided one assist in four Red Stripe Premier League matches for Reno FC since his return in January, and this has helped the Westmoreland-based club to a three-game unbeaten run, three points outside the top six and, importantly, seven clear of the relegation places.

At this stage last season, they were in eighth position and looking like a club heading into relegation.

However, with a completely new-look unit to include Foster, plus a few young players such as STETHS midfielder-turned-striker Demar James and Michael Kerr, Reno are beginning to look a refreshing unit under technical director Wendell Downswell.

Their come-from-behind 1-1 draw Sunday at home against a powerful Portmore United was a gutsy performance.

The draw keeps them five clear of Maverley-Hughenden (20 points) in the chase of sixth place.

"Three games without a loss in our situation is a big deal. I fail to remember the last time we have gone three games unbeaten, and this is because of the work we had put in during the Christmas break and the players we have added in the transfer window," said Downswell.

"The huge part of this really is that we got Craig Foster back with us for the rest of the campaign, and his goal-scoring acumen is well known. It's that sort of threat up front that we missed and he has returned with a bang. We are delighted with that," Downswell added.

Downswell added that Foster has added dynamism to his game, while playing for the Harrisburg City Islanders in the USL, and which is benefiting Reno in their three-game streak.

Foster could miss the next league match as a precaution, however, after picking up a knee injury midway the first half against Portmore.