Reno down MBU in hunt for top six 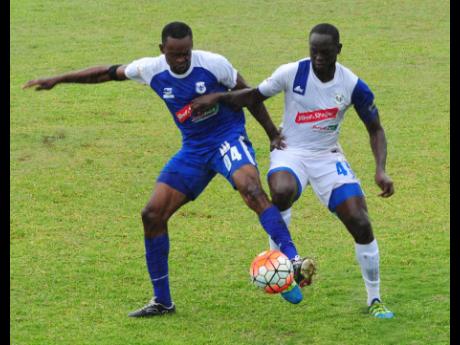 Defender Rondell Morris got the other goal for Reno.

It was a reversal of their first western derby of the season last November, when MBU won 2-0 at Wespow Park. The result kept Reno in seventh place in the standings on 28 points as Arnett Gardens (31) maintained the gap, after drubbing Jamalco FC 4-1.

But while the win was a great result, it was the way in which it was achieved that most pleased Reno's coach Godfrey Drummond.

"We are delighted to have won the match," Drummond said.

"We have incorporated the young players into our system and so far it is working quite well with the senior players taking responsibility on and off the field," he added.

Reno were ticking off their third victory in five matches and Drummond says he believes a top-six finish is within their grasp.

"The aim at the start of the season was to end in the top six and it's fair to say we are on target," stated Drummond.

MBU ended the game with nine men after both Deshane Beckford and second half substitute Jermaine Woozencroft were sent off.

"We never played like we wanted it today, but when down to nine men, I think we started to push, which shows we have character," said Dillon Thelwell, the MBU coach.