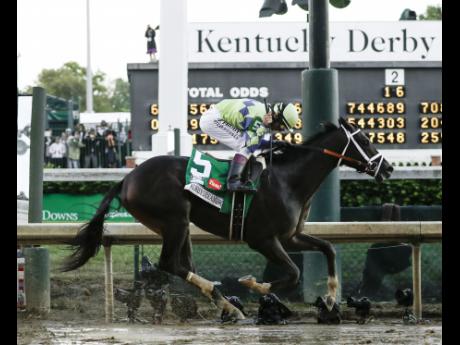 Always Dreaming winning the Kentucky Derby at Churchill Downs on May 6.

Eager to increase international interest in the Kentucky Derby, Churchill Downs is giving Europe a chance to have a potential entry in America's greatest race next year, as well as adding a prep race in the Midwest as part of its points series that decides the 20-horse field.

The track said last Thursday it is creating a series of seven races in Europe, separate from the 36-race 'Road to the Kentucky Derby' series in the US. One starting spot will be awarded to the European-based horse that accumulates the most points and accepts an invitation to run in the May 5 race. Last year, the track introduced a series of races for a Japan-based horse to gain entry to the Derby.

The seven European races will award a sliding scale of points to the top four finishers.

The Zen-Nippon Nisai Yushun, a race that often decides Japan's champion two-year-old dirt horse at Kawasaki Racecourse, has been added to the Japanese qualifying series on December 13, to go with the Cattleya Sho on November 25 and the Hyacinth in mid-February. Both are at Tokyo Racecourse.

A new prep race being added in the US is the $400,000 Springboard Mile, which will be run for two-year-olds on December 17 at Remington Park in Oklahoma City.

Churchill has used a points system to decide the Derby field since 2013. At least 20 horses have entered the Derby every year since 2004, and 17 of the last 19. The track is modifying the points awarded in the Spiral Stakes and the Lexington Stakes to 20-8-4-2 for the top four finishers.

The last Derby winner who previously raced overseas was Canonero II from Venezuela in 1971.