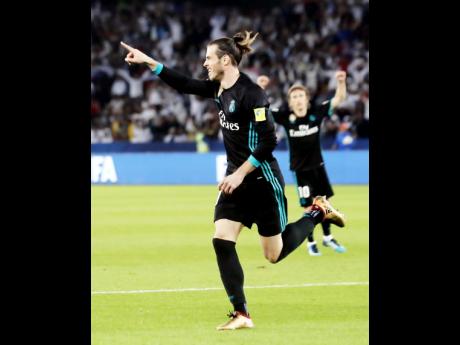 Madrid will try to win their third world title in four seasons when they face South American champions Gremio on Saturday.

The match had two goals disallowed by video review, one for each team. There was confusion when Madrid's first-half goal was ruled out by a decision that took nearly three minutes after the video assistant referee became involved.

Madrid struggled early and allowed the local league winners to open the scoring with a goal by Brazilian forward Romarinho just before half-time.

But Cristiano Ronaldo equalised early in the second half and Bale netted the winner less than a minute after entering the match as a substitute for Karim Benzema.

The Wales forward, coming off a series of injuries, scored with a low left-foot shot from the centre of the area after a pass by forward Lucas Vazquez, who had also come off the bench.

European clubs have made it to the Club World Cup final every time since the competition's new format started in 2001, winning nine out of the last 10 titles.

Madrid, who fielded their top players, were in control from the start, but made a series of mistakes in front of goal and couldn't capitalise on their numerous chances. Al Jazira goalkeeper Ali Khaseif made several difficult saves before being substituted with an apparent injury early in the second half.